Leo’s Fortune Is One Of A Kind Adventure Game

Leo’s fortune is an adventure game in which you are a cute fur of ball who has gotten his fortune stolen and are now on an adventure to retrieve it. You as Leo have suspicions that your relatives are the ones who have robbed you of your wealth.
This game is a paid game and it costs for 2.49 euros(at the time of writing this review) from Google Play Store and there are no in app purchases which you can make, which means you only have to pay once to play the complete game. 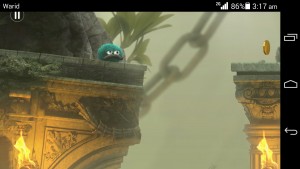 Leo thinking what move to make next

You travel through different lands collecting your wealth one coin at a time.
You also have to overcome obstacles and solve which make the game that much more difficult.
The game is quite difficult to play as the controls are a bit unorthodox. In the touch technique  as you have to slide your left thumb of finger what ever you prefer left and right to move Leo. With your right thumb or finger or what ever you prefer  slide them up to blow up Leo with air and float in the air while sliding down will I’ve Leo down.
These controls take some time to getting used to, but once you become used to them they become easy to use.
The game also provides with buttons, but I prefer the sliding controls.

Difficulty of the obstacles

The obstacles in the game are quite challenging and took me quite a number of tries to get past. As the game progresses the difficulty level increases typical of any game.

The objectives of the game are also quite difficult. You win a star if you complete the level within 3 minutes and 30 seconds. 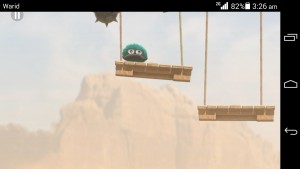 Leo jumping his way to get back his treasure

The art of the game has been professionally made and looks quite realistic. The development company mentions that the levels have been hand crafted, and yes they are beautiful. The environment suits to the game and so does the audio music and sound effects. They have been well made as well.
The controls are smooth and responsive which further help the game play. Once you get used to the controls the controls become second nature.
The story of the game is also interesting and once wants to continue playing the game to find out what happened.
Another good thing that I like is that there are checkpoints in the game from where you can continue to play the game of you die. However I would have likes if I could save the game where I left it. If I quit a level all progress in that level is lost. I have no choice of either completing the level or minimizing the game which may eat up your battery.
It would have been better if the developers  would have added a save feature. There are obstacles where it took me quite a long time to overcome and then comes another obstacle which I am not able to overcome and want to take a break as I it becomes exhausting eventually.

Other than this the game is pretty good and I recommend it. If you are willing to pay some money to buy the game, and want to have a great gaming experience then the should check out Leo’s fortune for android.