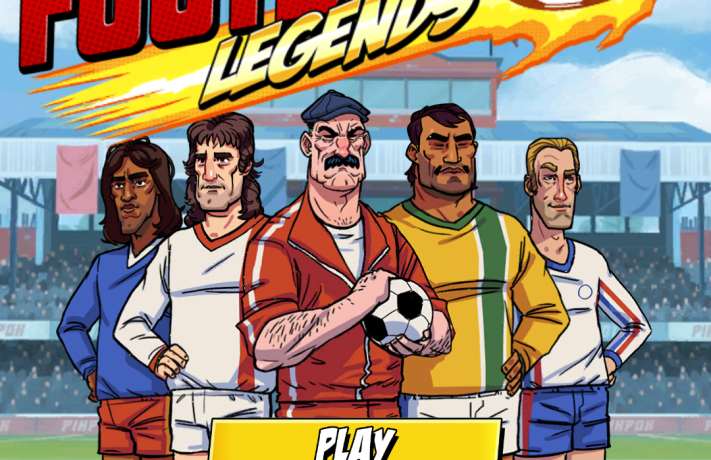 Flick Football Legends is an interesting and a fun game

I love football and I am big supporter of Chelsea FC (Football Club),  so sometimes I also want to play football games on my Android device and what better game to play then Flick Kick Football Legends. Unlike most football games this is a flick based game with very interesting story to it.

Flick Football Legends is set as a comic based game from the 70’s. The story is slowly revealed as the player progresses through the game making the game even more engrossing. Who does not want to know the secrets of this game? I sure do!!!

For a newbie this game can be very challenging at first but soon you will get the grasp of it, as you play it and furthermore you can also practice in the practice mode of the game.

There are five main actions during a match which you can peform,  i.e pass, shoot, defence, keeper and penalty.

The game gets challenging and difficult to play as you progress through the levels. Once when it was easy to pass and tackle, become a nerve wrecking action. If you miss a tackle the opposing team will surely score. Who wants to loose a match which you have set up to such a position, while if you loose your concentration it will all go down the drain. 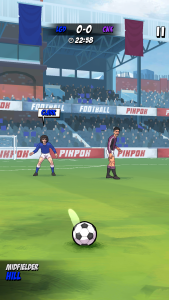 There are four main game modes from which you can play:

Main story of the game starts when you play league mode and you have to manage a junior team and help it win matches and rise in the league tables.

You can also purchase new players in the form of cards. Before you start playing the team sheet shows the special power of each player and their powers can be upgraded using experience. To gain experience you have to play matches.

In infinity cup you will play unlimited amount of matches until you you draw or lose a
game. 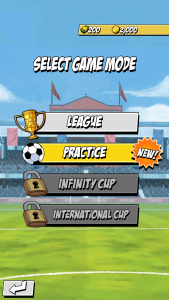 In international cup you play for England and same as in league mode you have to play divisions. There are a total of 3 divisions.

Flick Football Legends uses the strategy of making the player wait after playing the game a few times. The energy resource being used in Flick Football is stamina and once consumed each stamina is generated after 30 minutes. A total of 5 matches stamina is available but it can be increased to 8 or 16 matches if you buy the stamina.

New players are unlocked in the form of cards, and you can also buy using coins or money from the store.

There is also pre-game, half time and post-game commentary which is funny yet interesting. The commentators always have something witty to say.

Even though this game is really great, i did find some problems which the development team should immediately resolve.

Firstly, the match duration is around only 1-2 minutes and it cannot be changed.

Secondly, the stamina refill time is too long, of 30 minutes. The game employs the rule of giving rest to the player, but it should not be too much such that the rush of playing the game washes away. Either the player has to wait for the stipulated time, or has to spend money to buy more stamina. I believe the time out time should be reasonable such as 5 minutes per each stamina level, anything more than that will be a buzz kill for the player.

Thirdly, if you perform poorly in the league you can not restart the league and have to complete it. I myself was frustrated when i had to play through a league only have to play it again, because i failed to win it. This particular feature can be putting off to casual games, who may just stop playing the game all together due to this.

I recommend this game, as it is addictive, and a great time killer, and for footbal fans like me it is a heaven sent. This one game will always be part of my games collection on my phone.