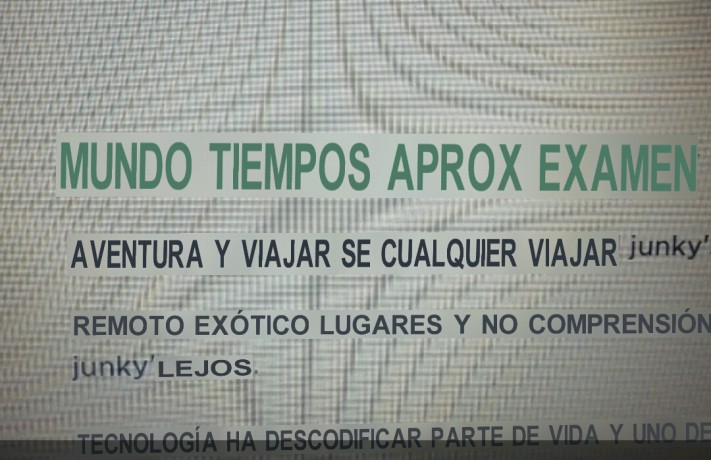 The Translation App For Travel Junkies

Adventure and travelling are any travel junky’s passion and life. Remote exotic locations and no understanding of the local language can not keep a travel junky away from the adventure of a lifetime.
Technology has become part of life and one depends on it to accomplish daily tasks. To make life easier for a travel junky a company has developed a translation app which uses the principles of computer vision and image processing to translate text which is brought into the camera view of the device.
World Lens Language Translator translates the words and replaces the translated words and places them right on the screen. This is quite interesting as the user just has to select the language and hold up the phone towards the target text which he wants to translate. 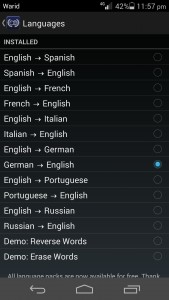 World Lens provides a selection of built in language translations which you can use.

There are two other features which i feel are bells and whistles and do not provide any useful use to the user.

The reverse the words feature displays the target text it in a reverse order. 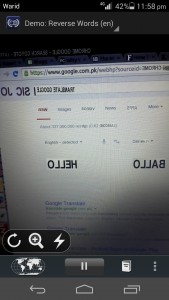 World Lens also provides a reverse words feature where you can reverse the words of the text.

The erase the words feature erases the text by displaying the color of the background on the screen where the text was originally. 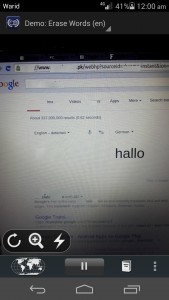 World Lens also can remove text from the screen.

UX, Design, and Ease of Use

World Lens is quite easy to use. Select the language to translate from the menu at the top of the screen and all you have to do is to point the camera towards the text to the text that you want to translate.

As mentioned earlier the translated text is displayed over the text and shown on the screen of the device.

I really like this as i do not need to change screens to get the translation. Due to this the app becomes really easy to use, however you do have to keep the camera still or the translation won’t work properly.

The app is really useful as it translates in real time. Suppose you are travelling and find a road side board in the local language (the app must support the language) and you hold up the device to the road side board you will be able to see what the board says. 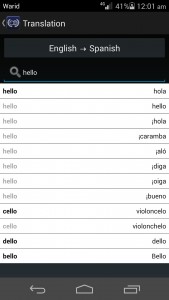 You can also type in the text which you want translated.

You can also freeze the frame by pressing the pause button at the bottom of the screen. When the translation has been done you can translate that text to another language using the language settings.

Furthermore the translation is all offline, which means you do not need an internet connection to translate. This feature makes the app quite useful as this app will most probably be used in locations where there will be little or no internet connection. 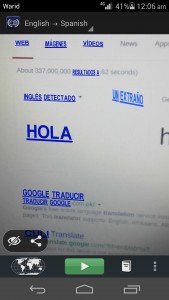 World Lens allows you to freeze the frame for easier reading.

Problems That I Found

The quality of the app is quite good, but it does have some problems.

Secondly, you have to keep the phone still while translating the text which can get a bit difficult, but you can use the freeze frame feature as explained above.

World Lens offers a limited selection of languages to choose from, but if the travel junky is travelling to a country whose language is supported then this app can be quite useful, but for other countries it won’t be of much use.