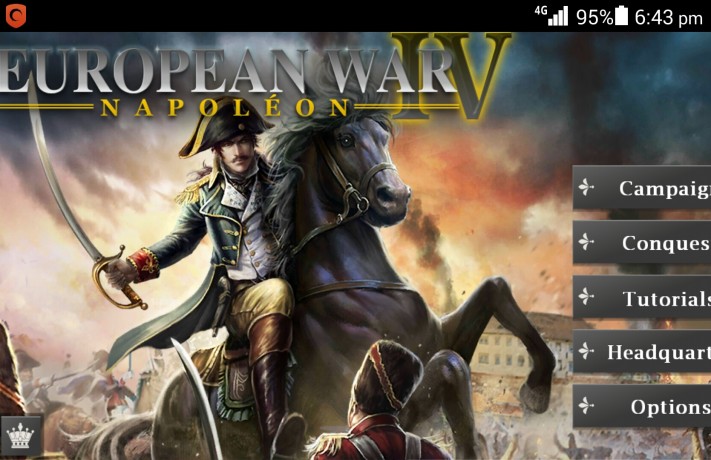 I have loved playing strategy games may they be real time or turn based. The first turn based strategy that i play was the all famous utopia. It was introduced to me by a friend and i spent many hours playing it. Games like Red Alert, Tiberium Sun, Empire Earth, have been a major part of my child hood.ir-leasing.ru

I used to play strategy games in my computer all those years ago. Then came the mobile age and have been looking for a good strategy game which would be at par with those game of another era. Going through the Google Play Store did not disappoint me, as i found a game by the name of European War 4: Napoleon, a turn by turn based strategy warfare game.

Along with this game, i have found many other war based strategy games, which i think is a really good for the fans of strategy games.

European War 4: Napolean is a turn by turn war based strategy game. Unlike the real time strategy games, in turn by turn games each player takes turns to make his moves making sure that he get the most benefit from the moves.

This game is set in the Napolean era. In the first two campaigns you can play as either France or the alliance which was fighting against France at that time. There are other locked campaigns which are situation in different locations in the world.

During turns you are to manage the economy as well the military of your country. You will be building towns, stables, sea ports, armories, and much more. You will also be collecting resources to keep your economy going so that you can build an army so that you can fight against your enemies.

You can also make alliances, though i have not found out how to do so, but when i attacked one of my supposedly allies (i did not know that the country was my ally, i was told that the alliance will be over if i continued to attack, which it did).

After you take your turn you have to end your turn so that the opponent can take his turn.

In turn based games you have to plan and strategise before hand because the game does not happen in real time, and you only find out what your opponent will do after you have made your moves.

If you have liked what you have read so far, why do you not subscribe to our weekly updates? We hate spam and will not send any to you.

As the name conquest suggests you have to defeat all of your enemies and conquer over the war scenario. Think of this as the skirmish battles/wars that we used to play in real time strategy games. There are no defined objectives in the conquest mode except for defeat all and conquer as much as you can.

In the campaign mode you have to complete the missions within a set number of turns, while in the conquest mode the game can go on for hours. This can get tiring but you can save the game and then continue when you freshen up your self.

The game has been made well. The art, animation and the music have been well designed and implemented, with proper sequencing. I have not yet found any bug in the game.

Did you like this post? Why don’t you not subscribe to our newsletter to get weekly updates? We hate spam and will not send any to you.